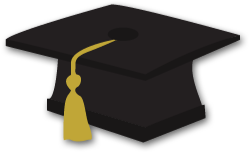 Separate from her husband's legacy, Michelle Obama's personal achievements stand on their own. Michelle was born in Chicago in 1964 and later attended Princeton University; she was awarded a law degree from Harvard Law School in 1988.1 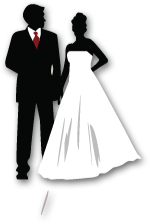 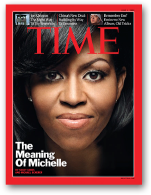 Michelle was rewarded for her efforts in social activism by being named one of Time Magazine's 100 Most Influential People in 2013. Time praised her for her humility and willingness to step outside the box of a typical wife of a political figurehead.

According to Michelle, her guiding compass in her rise to political fame was found in her strong sense of personal identity, "One of the lessons that I grew up with was to always stay true to yourself and never let what somebody else says distract you from your goals. And so when I hear about negative and false attacks, I really don't invest any energy in them, because I know who I am." 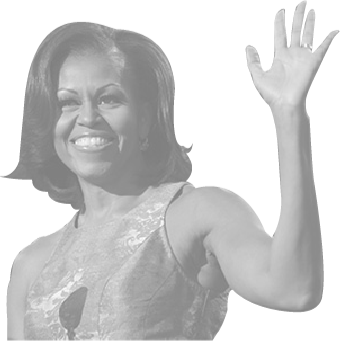 THIS UNSHAKABLE IDENTITY CAN BE SEEN IN BOTH MICHELLE'S SOCIAL CRUSADES AND HER PERSONAL STYLE.

Though influential in political fashion history, Michelle wasn't the first First Lady to embrace White House style. Other First Lady fashion icons before her include:2 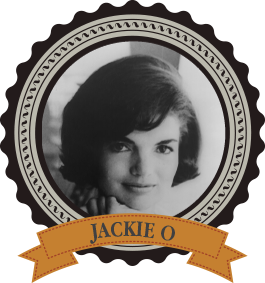 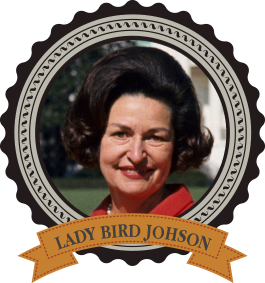 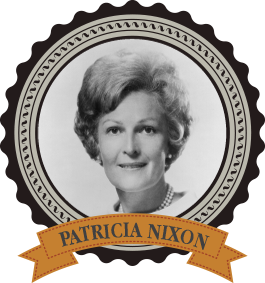 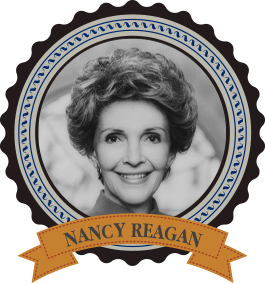 Mrs. Reagan will forever be known for her signature red color, a favorite throughout her polished wardrobe. 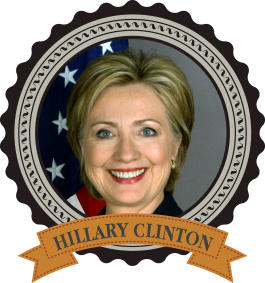 Famous for wearing a signature power suit both as a First Lady and in her own political career.

"I have seen firsthand that being president doesn't change who you are,it reveals who you are."
- Michelle Obama

These forward-thinking First Ladies paved the way for Michelle Obama when it came to both style and political influence. Today, a First Lady does much more than provide support for her husband while in office. She is an iconic figure that all American women look to for guidance in political, social, and fashion trends.

Michelle Obama's Classic yet Contemporary Take on a First Lady

THE EVOLUTION OF MICHELLE OBAMA’S SIGNATURE STYLE THROUGHOUT HER TIME AS FIRST LADY OF THE UNITED STATES SO FAR:3 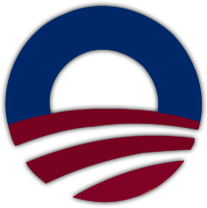 Wore a casual J. Crew ensemble with a belted sweater and pencil skirt.

Wore a simple, chic black cardigan with an A-line skirt and pearls.

Jumped rope in a belted cardigan with Capri pants.

Wore a gold, shimmery Calvin Klein dress with a cardigan.

Wore an elegant navy Thom Browne coat and dress combination, made with silk-necktie inspired fabric that was custom-made for the First Lady.

Michelle Obama's FLOTUS fashion choices range from casual to elegant, depending on the occasion. In her everyday life, you may see her in a pencil skirt with a matching cardigan or wearing a bright floral print dress on a family vacation. For a political event, she can be seen in a sophisticated designer gown that merges contemporary design with classic style.

IF MICHELLE OBAMA'S FASHION CHOICES ARE ANY INDICATOR OF HER PERSONAL CONVICTIONS, SHE IS ALWAYS WILLING TO PUSH THE ENVELOPE, WHILE REMAINING TRUE TO HERSELF.

First Lady fashion even became a bone of contention in the 2012 presidential election. First-Ladies-in-the-running Michelle Obama and Ann Romney faced off in the world of fashion as their husbands duked it out in the political arena.

In the Michelle versus Ann fashion war, Michelle came out on top based on overall social media mentions throughout the political campaign. Here’s how the mentions breakdown:

IN FACT, A SIMPLE NOD OF APPROVAL FROM THIS STYLISH FIRST LADY COULD BE WORTH ITS WEIGHT IN GOLD.

After Michelle Obama is seen wearing a certain designer brand, stock prices for the company automatically increase. Coincidence? Maybe not. Michelle Obama is a diehard Saks devotee; since her time as First Lady, Saks has seen long-term financial gains.4 Even more interesting is the fact that a brand's financial success shows no relationship to President Obama's approval ratings at the time.

Top designers are fighting for her to wear their labels in the hopes of boosting sales and brand appeal. Every trendsetting piece, large or small, worn by Michelle makes headlines in this digital age. Even Michelle sporting a simple White House Black Market dress on a TV appearance can draw immediate attention to a brand so that an item will literally sell out the next day. 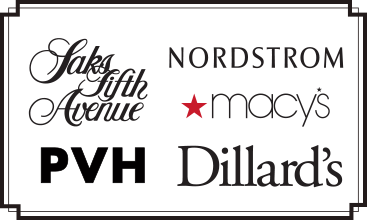 For example, after Michelle wore the famous sari-inspired Naeem Khan designer gown to the 2009 State Dinner, Khan confirmed that his designs were "flying out of stores."

After donning the shimmery, gold Calvin Klein dress for the 2009 Nobel Peace Prize Ceremony, Michelle Obama's endorsement was linked to $772 million in aggregate gains for all companies associated with the garment, including Saks, Nordstrom, Macy's, Phillips-Van Heusen, and Dillard's.

"STYLE HELPS DISTINGUISH YOU. IT'S A GREAT POTENTIAL OPPORTUNITY THAT PEOPLE TEND TO LEAVE BY THE WAYSIDE." - MICHELLE OBAMA

Fashion experts believe that no other First Lady in history has had this profound effect on the fashion industry. Michelle Obama's fashion choices influence modern style, as well as the success of independent and mainstream fashion labels.

DOES BEING A FASHION TRENDSETTER RUN IN THE FAMILY?

And as the saying goes, "Like mother, like daughter." Taking after their mother in casual sophistication, the girls are miniature fashion icons, featured in fashion editorials by magazines like Teen Vogue. 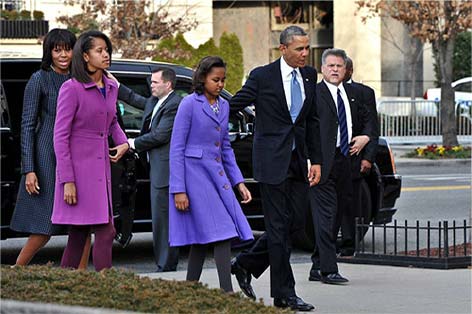 Michelle Obama's fashion take is unique in that it integrates
top-of-the-line designer pieces with affordable off-the-rack items. Instead of throwing out cheaper looks for high-fashion pieces "just because she can," Michelle's fashion combines the best of both worlds. And she still manages to make best-dressed lists in the likes of Vogue Magazine.

"Women in particular need to keep an eye on their physical and mental health, because if we're scurrying to and from appointments and errands, we don't have a lot of time to take care of ourselves. We need to do a better job of putting ourselves higher on our own 'to do' list." - Michelle Obama

Some may say that these simple fashion choices go hand-in-hand with Michelle's mission to inspire women throughout the US. Personal development, physical health, and fashion sensibility all merge into one as an expression of Michelle Obama's signature style.

What does it take to fill the shoes of this down-to-earth First Lady? Here are some of Michelle's most popularly relatable fashion trends:

"First and foremost, I wear what I love. That's what women have to focus on: what makes them happy and what makes them feel comfortable and beautiful. If I can have any impact, I want women to feel good about themselves and have fun with fashion."
- Michelle Obama

5 Steps to Get the Michelle Obama Look for Less

All of the above items are easy to find at any major retailer to create your own affordable Michelle Obama look. Follow these simple steps to dress yourself in head-to-toe FLOTUS style: 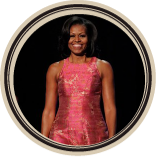 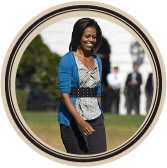 Have a staple piece. For Michelle, every outfit looks best when worn with a colorful cardigan, whether a casual pencil skirt or a designer dress. 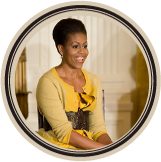 Dress it up with a belt. Even a simple tank top and Capri pants can look refined when dressed up with a statement belt and cardigan. 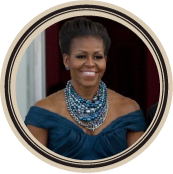 Always accessorize with jewelry. An outfit isn't complete without a well-placed brooch or a favorite pair of stylish pearls. 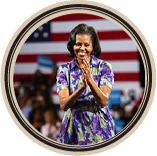 Keep it lively with color. Michelle loves floral print and patterned skirts, dresses, and tops that work perfectly with her preferred cardigan-and-belt combo.

When in doubt, keep it classic. Though Michelle has been known to wear high-fashion pieces for important occasions, she is most likely to sport a classic American brand like J.Crew on a day-to-day basis. Having several timeless pieces in your closet to mix and match will make it easy to throw together a sophisticated yet casual Michelle Obama look last minute.

While many see fashion as fun and frivolous, Michelle Obama proves that First Lady style can be an expression of personal identity. Michelle Obama uses her fashion influence to inspire women, support designers, and even boost the US economy.

First Ladies to come have big - and stylish - shoes to fill. Though Michelle Obama may not see her own personal style as particularly innovative or groundbreaking, she teaches women everywhere a valuable lesson that can be used in all areas of life. When it comes to political conviction, personal relationships, and especially fashion, Michelle Obama urges, "Just do what works for you, because there will always be someone who thinks differently."