Iconic Audrey Hepburn in a Nutshell

If you're one of the millions of women with a little black dress in your closet, you have Audrey Hepburn to thank. Celebrated movie star and fashion icon Audrey Hepburn became the face of classic 1960s fashion. Audrey's style was the perfect expression of her personality: sweet, unassuming, and often whimsical.

but back to the LBD

This beautifully simplistic and ultra-chic wardrobe staple was popularized in Audrey's box office hit Breakfast at Tiffany's in 1961. Audrey, a.k.a. the glamorous Holly Golightly, wore a little black dress by Givenchy that many critics have called one of the most iconic clothing items in the 20th Century.

But Audrey was much more than this legendary look. Audrey Hepburn was a talented actress and later a humanitarian. She starred in popular films of the 1960s, like Charade, My Fair Lady, Funny Face, and Two for the Road that put her fashion sense on the big screen for the whole world to see. And so, a fashion trendsetter was born. 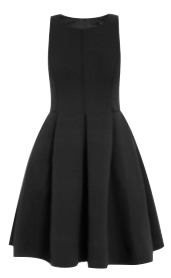 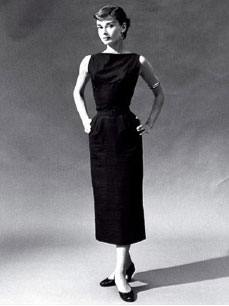 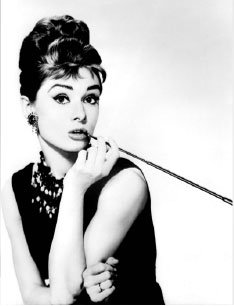 Audrey Hepburn style is easy to recognize when you see it

Audrey may have never anticipated that her effortless 1960s style would be so popular and so timeless. Women today still clamor for vintage, Audrey-inspired looks. Designers continue to reinvent "the Audrey" again and again with new takes on her classic looks.

We've only skimmed the surface when it comes to what quintessential Audrey Hepburn style is all about. While Audrey was known for her understated elegance, she was also responsible for introducing new fads that helped shape the fashion industry.

Here are some of the highlights of Audrey's timeless trends: 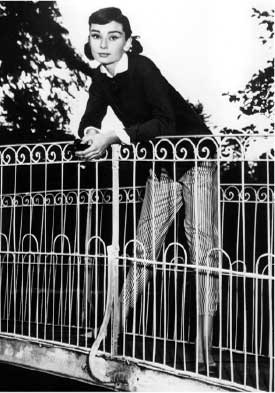 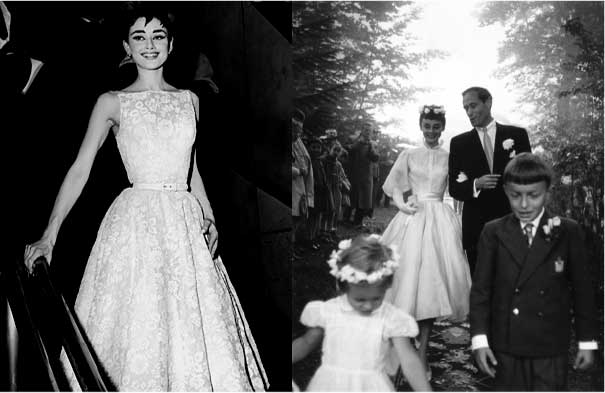 Audrey (left) won an Oscar for Best Actress in Roman Holiday and wore a stunning yet simple Givenchy dress with a full skirt to the Academy Awards. The lacy dress was unassuming, feminine, and classic in its silhouette. Audrey (right) was married the same year in a fairytale-inspired Balmain wedding dress; she completed the nymph-like look with a crown of flowers in her hair. 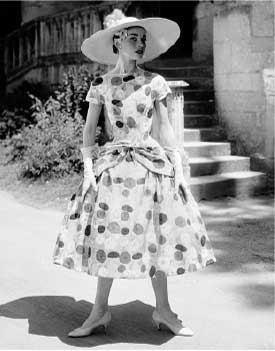 A summertime look for Audrey meant a round straw hat, summer gloves, and a stylish floral-print summer dress with a full skirt. 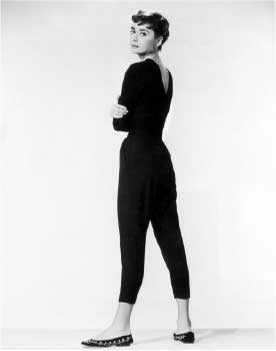 Funny Face introduced Audrey's boyish take on beatnik style: flats, cigarette pants, and a turtleneck in all black from head-to-toe, paired with a sporty ponytail. 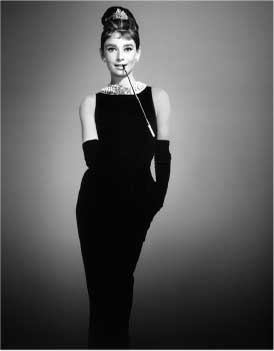 Breakfast at Tiffany's style launched the little black dress, along with a sleek, pouffed up-do—perfect for a glam evening out. 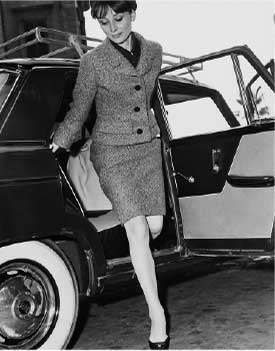 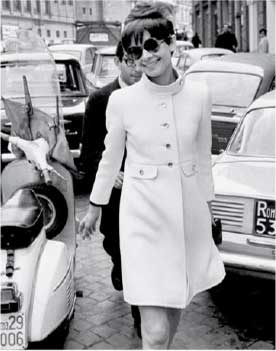 Audrey could be seen out and about in a "Twiggy chic" look: short, cropped hair, a knee-length trench coat, striped tights, and knee-high flat boots. 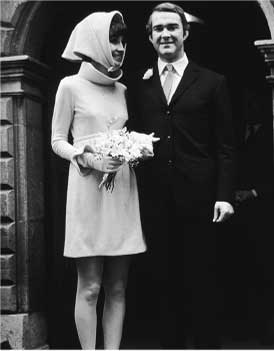 Audrey's second wedding screamed 1960s mod in a long-sleeved white minidress paired with a white headscarf instead of a veil. 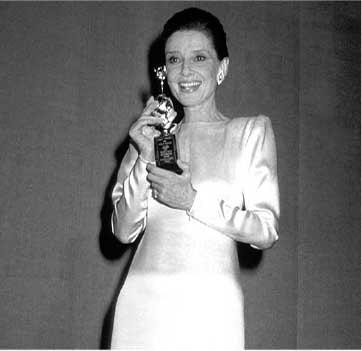 Like a fine wine, Audrey only got better with age. She kept her traditional 1960s-inspired up-do and wore an embellished sleeveless gown with a simple cut to the 47th annual Academy Awards. 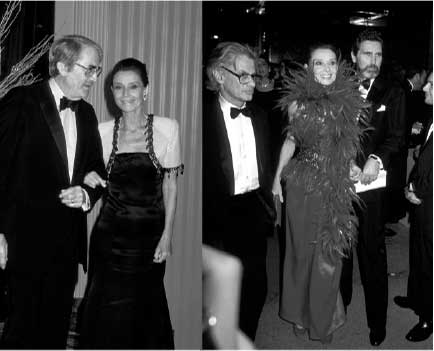 Audrey in the later years still kept it sleek, classy, and age-appropriate. She wore a tasteful black strapless gown with a beaded pink shrug to an event in the late 80s.

Legendary Audrey style was much more than her choice in garments 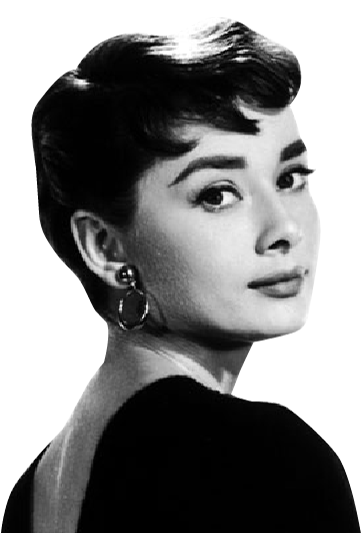 Audrey was one of the first big screen actresses to popularize once-masculine hairstyles, like the now trendy pixie cut. Audrey made ultra-short hair work by dressing up the look with feminine dresses, delicate pearl earrings, and signature scarves.

Audrey's style also included her bold eyebrows, a trend that resurged again with Brooke Shields in the 1980s. Audrey's eyebrows were sculpted, well-groomed, and feminine. They framed her delicate look with minimal makeup and a sleek up-do or cropped cut.

With each classic look, Audrey wore plain makeup to complement her fresh-faced sex appeal. Compared to a more va-va-voom type like Marilyn Monroe, Audrey was the girl-next-door that was almost impossible to resist.

Through all of Audrey's style transformations, there was one common thread:

Givenchy adored Audrey and considered her his fashion muse.
They had a close, personal relationship that continued for decades. Givenchy designed for Audrey in some of her starring roles like Breakfast at Tiffany's and Funny Face; the famous Givenchy LBD that Audrey wore as Holly Golightly in Breakfast at Tiffany's later sold for £467,200 in 2006.

"His are the only clothes in which I am myself. He is far more than a couturier, he is a creator of personality." 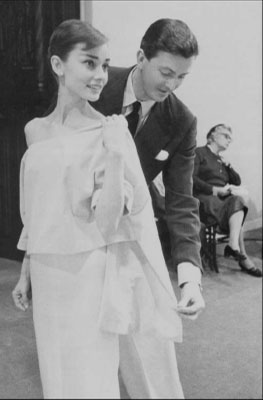 Many say that Givenchy was attracted to Audrey's petite frame as a fashion silhouette. Her body type was perfect for 60s style trends like cigarette pants, cinched-waist gowns, and collarless tops.

In what some refer to as a "fashion love affair," Givenchy bolstered the iconic actress's fashion influence, while Audrey looked to the designer for his timeless creations again and again, increasing the famed designer’s notoriety.

"Clothes look great or not so great, depending on who’s wearing them. I truly feel Audrey gave Givenchy a look. As time went on, they collaborated, but I think she picked what was Audrey out of Givenchy. The same for my clothes. She just picked from them what was right for her."

in the 21st Century

Why change? Everyone has his own style.
When you have found it, you should stick to it

Audrey found what worked for her,
and she stuck to it.

Whether it was simply cut cigarette pants or a full-skirt gown worn to an awards ceremony, the true Audrey shone through. It's no wonder that Audrey Hepburn is considered one of the most celebrated fashion icons of our time.

So how do you capture the style, class, and grace that embodied Audrey in every outfit she wore? Adding just a few statement pieces to your closet can help you to channel your inner Audrey every time you head out for a night out or an afternoon of errands. 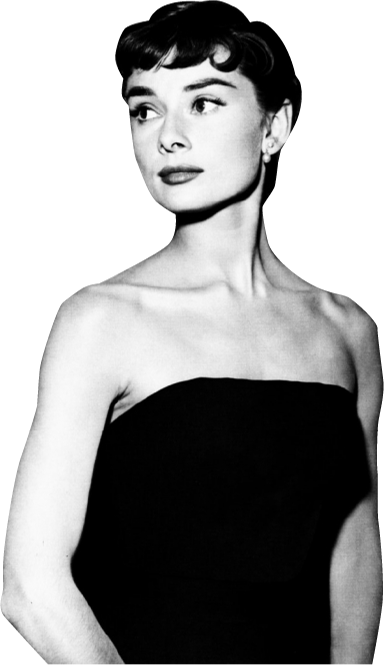 Recreate the Audrey Hepburn look with 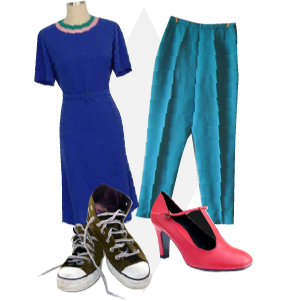 Audrey knew what worked for her and she stuck with it. Audrey was single-minded in her classic style, even from a young age. If you have one silhouette that fits your personality perfectly, stick with it and dress it up or down for the occasion. For example, you may wear embellished ballet flats with every outfit or a patterned scarf with your favorite pair of blue jeans. When in doubt, tailored clothing does the trick; a few well-made garments in your closet can be worn year after year and jazzed up with new trends from each season. 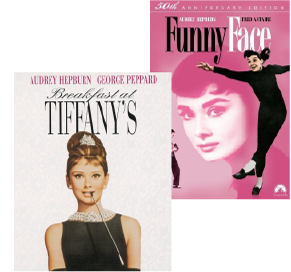 Do you really need an excuse to watch Roman Holiday or Breakfast at Tiffany's? If you're feeling ho-hum, take a moment to watch Audrey in action. Her no-frills 60s style goes hand-in-hand with her authentic personality. An afternoon of Audrey flicks could give you the motivation that you need to hit the mall and find the right pieces for you. 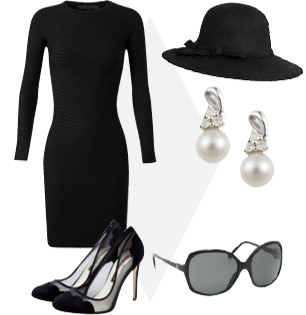 If you've learned one thing from this Audrey Hepburn style exploration, it's that simple and sleek will get you far. Even beautifully designed gowns custom-made for Audrey by Givenchy focused on simple silhouettes. Start with a well-made, effortless garment and add a few accessories from there. Classic jewelry, an oversized hat, a scarf, and a pair of sunglasses are more than enough to dress you up for a day out with friends. 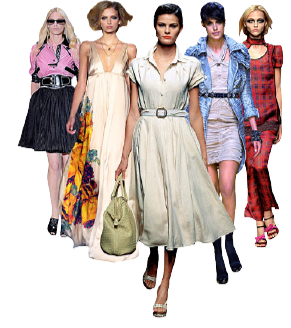 Don't jump on every trend

Audrey was a trendsetter, not a trend follower. Though there's nothing wrong with embracing the latest fad to hit the runway, don't compromise your personal style. Stick with what works for you. 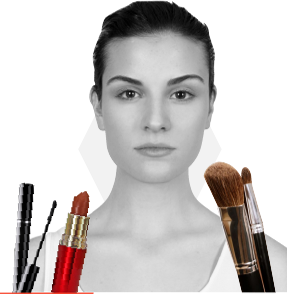 Polish your look with impeccable grooming

Grooming is more than the icing on the cake, it's the frame for your finished look. Audrey was known for her chic hairstyles, low-maintenance makeup, and beautifully polished eyebrows. Once again, it's important to do what works for you when it comes to your personal beauty. If you don't have Audrey's eyebrows, not to worry: Focus on your best feature, like your lips or your eyes, and work from there. Play up one attribute, and don't overdo it. Your grooming will speak for itself.

Audrey's signature look was an expression of her personality

Here are 10 style lessons
that she taught us:

Here are some key pieces to add to any
Audrey-inspired wardrobe:

Audrey's preferred color palette was also classically understated. Audrey loved black, white, and pink and considered them her favorite colors. Though, it should be noted that Audrey rarely wore pink and instead saved it for special occasions. When hand-picking your Audrey wardrobe, stick with the basics—classic pieces in black and white, with occasional pops of color.