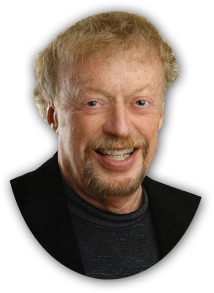 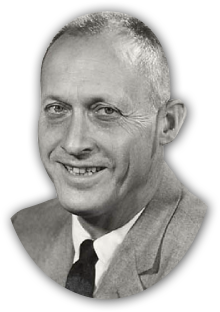 Nike was started by two running enthusiasts in the 1960s: Bill Bowerman and Phil Knight. Bowerman was an esteemed track and field coach at the University of Oregon and dabbled in running shoe development to support competitive performance. Knight was a middle-distance runner and student at the University of Oregon, with Bowerman as his track coach. Knight too had a passion for running shoe innovation; he wrote a paper that discussed how higher-quality running shoes could be manufactured in Japan to compete with current German brands on the market.

After Knight contacted Tiger shoes in Japan to become a distributor, Bowerman offered to contribute his footwear designs. With a simple handshake, the pair formed Blue Ribbon Sports with personal contributions of $500 each in 1964. Both men kept their day jobs. Knight began selling shoes out of the trunk of his car, while Bowerman literally ripped shoes apart to determine how he could improve their design.

A SMALL COMPANY THAT BEGAN WITH TWO MEN, A VISION, AND A PAIR OF RUNNING SHOES QUICKLY TRANSFORMED INTO A WORLDWIDE PHENOMENON.

Today, Nike is a global producer of sports equipment as it manufactures shoes, athletic clothing, and equipment for a number of sports, including basketball, baseball, football, tennis, soccer, lacrosse, cricket, track and field, and many more. Nike, Inc. has expanded to include popular brands like Converse, Hurley, Jordan, and Nike Golf.

The common thread that holds all of these brands and products together is the renowned Nike symbol. How did a simple checkmark or "Swoosh" become synonymous with a budding athletic brand?

AS THE SAYING GOES, A STAR WAS BORN.

The power of the Nike logo design can be broken down based on its features:

The checkmark or Swoosh is designed to represent the wing of the Greek goddess of victory, Nike; the goddess was known to motivate brave warriors.

The Nike logo is most popularly seen in dull orange, although the logo was first produced in bold black.

The Swoosh logo is often depicted with the Nike name on top, another example of straightforward branding in commercial marketing.

The origin of the famous Nike slogan may surprise you. The Just Do It Nike campaign was inspired by none other than the serial killer Gary Gilmore. When Gilmore was executed before a firing squad in 1977, his last words were, "Let's do it."

This simple phrase became the face of what many now consider to be an ingenious sports marketing campaign. Although the exact origins of the campaign slogan were kept under wraps for many years, copywriter Dan Wieden can be credited with improving upon the famous last words of a spree killer.

Since its introduction in 1988, the Nike Just Do It slogan has been one of the most successful advertising campaigns in the 20th Century. Nike stuck with its simplistic vision to gain an edge over the competition, and was embraced by all-star athletes to secure its place as a reputable sports fashion brand. 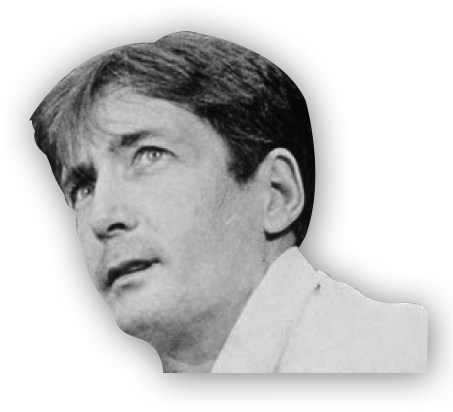 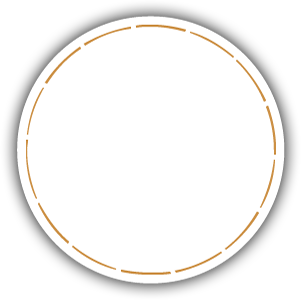 According to Nike legend, the original Nike company of Blue Ribbon Sports was, "Founded on a handshake, $500 and mutual trust."

As a University of Oregon track coach, Bowerman was able to use his runners to test early Nike creations. Jeff Johnson was hired as the first Nike (then Blue Ribbon Sports) employee in 1965. Knight resigned from his position as Assistant Professor of Business Administration at Portland State University to go full-time with the company in 1969. 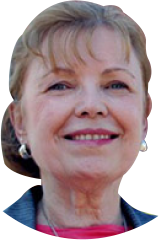 The 1970s was the official birth of the Nike brand. The company was named Nike after the Greek goddess of victory in 1971. The famous Nike Swoosh logo was created by graphic designer Carolyn Davidson for just $35. Nike introduced their first soccer/football athletic shoe available for sale in 1972, just in time for the US Track & Field Trials held in Eugene, Oregon. 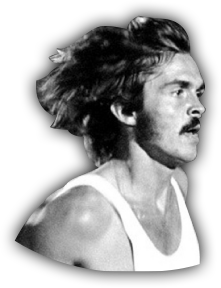 1970s Nike marketing wouldn't be complete without its first celebrity endorsement from a fellow Oregonian and celebrated runner, Steve Prefontaine. "Pre" contributed to early Nike creative development and quickly became a national ambassador for the brand after graduating from the University of Oregon. Sadly, Pre died in 1975 at the age of 24 after a short-lived but highly successful track career.

TO THIS DAY, KNIGHT CALLS PRE THE "SOUL OF NIKE."

On a trajectory toward early success, Nike introduced a promo tee as its first apparel item. The Waffle Trainer, created by Bowerman, became the best-selling shoe in the US. Nike also introduced the Elite spiked racing and training shoe, along with the first air sole system Tailwind running shoe. Within the decade, Nike began to sell shoes in Asia for the first time with factories in Korea and Taiwan. 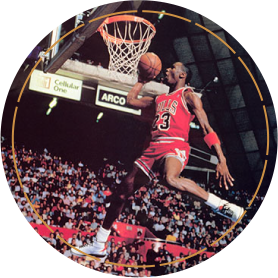 By the time the 1980s rolled around, it was up to Nike to think of new, creative ways to expand upon their success. In 1980, Nike completed its IPO to become a publicly traded company. Knight remained chairman of the board and CEO, but he stepped down as president from 1983 to 1984.

Nike began to lose its toehold as industry leader in the mid-1980s, partially due to misdirection in the 80s aerobics craze. The brand strategically debuted a signature basketball shoe for NBA rookie Michael Jordan in 1985, which helped put them back on the map.

Nike built on this buzz with the Nike Revolution of 1987 and launched its Air Max footwear featuring visible Air Bags in a TV commercial to the soundtrack of "Revolution" by the Beatles.

IT WASN'T UNTIL 1988 THAT THE JUST DO IT CAMPAIGN LAUNCHED.

Nike Just Do It ads featured new cross-trainers worn by Bo Jackson. In 1989, Nike cross-training footwear exploded thanks to the Bo Knows ad campaign. As the decade came to a close, Nike was on top once again.

Within the 1980s, Nike footwear became top sellers in Canada and was produced in 11 countries. Nike footwear lines expanded to more than 200 shoe designs, including the first cross-trainer, the first Air Max, and the first high-performance Destiny running shoe for kids. 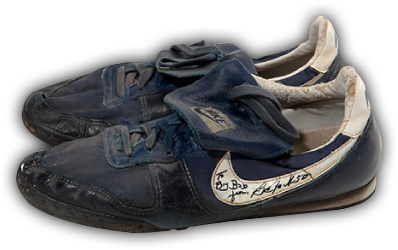 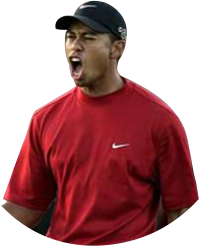 Nike christened its world headquarters in Portland, Oregon, in 1990. In the same year, Nike opened Niketown in Portland to offer a "retail-as-theater experience."

In the mid-90s, Nike focused on more in-depth designs for golf and soccer footwear and apparel. In 1994, Nike signed endorsement deals with top players from the Brazilian national soccer team that soon won the World Cup. In 1995, Nike took on the entire World Cup team and designed their uniforms. In 1996, Nike Golf signed the rookie player Tiger Woods in a whopping $5 million a year contract.

THOUGH THE DEAL WAS MET WITH CRITICISM, NIKE HAD THE LAST LAUGH WHEN TIGER WON THE 1997 MASTERS. 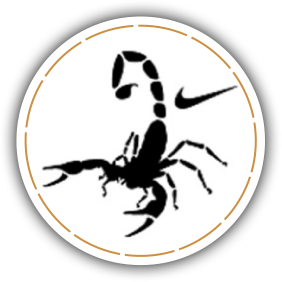 Nike debuted the new Nike Shox footwear cushioning system in 2000 in Sydney, based on development and design concepts spanning more than 15 years. The cushioning system provided greater stability and support and was considered the new industry gold standard.

Nike launched their first global marketing campaign called The Secret Tournament to coincide with the FIFA World Cup in 2002. Nike opted to stray from superstar athlete endorsement deals in what they considered to be a "multi-faceted consumer experience" for fans of the World Cup. Secret Tournament advertising included PR, online and off-line ads, and consumer events to create a buzz about Nike soccer gear. Nike saw such success from the Secret Tournament campaign that it became the platform for all future Nike marketing. 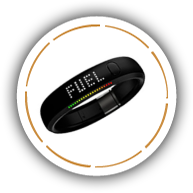 In 2012, Nike introduced a $150 FuelBand bracelet that tracks physical activity throughout the day to promote exercise. Nike also launched the lightweight Flyknit Racer as an eco-friendly shoe that feels more like a sock than conventional athletic footwear.Nike became the official sponsor of the NFL as of 2012 with plans to hit sky-high revenue targets of $28-$30 billion by 2015. 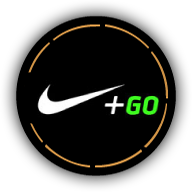 The new millennium brought on a multitude of Nike achievements, including the launch of the NikeGO program to promote physical activity among youth, a prestigious Advertiser of the Year award at the Cannes Advertising Festival, and record international sales that beat domestic sales in 2003. Nike was considered the Number One Most Innovative Company of 2013.

Throughout its 50-year history, Nike has made waves with its cutting-edge advertisements. Here are some of its top ad campaigns over the years:

Launched in 1988, the ad helped Nike bounce back from a mid-decade slump.

Tiger Woods was introduced as a newbie golf pro in 1996 in an in-your-face advertisement.

Nike's 2002 ad won a Best Commercial Emmy (the second for the brand) when it featured amateur and professional athletes displaying the human body in motion. 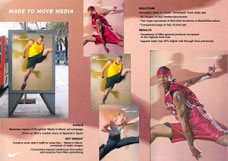 Nike's Bo Jackson ads are considered some of the most memorable commercials of all time, celebrating Jackson's athletic prowess in both football and baseball. 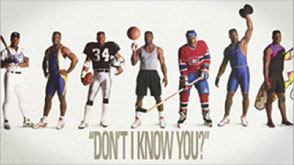 In 2005, Nike went viral with a YouTube video of Brazilian soccer player Ronaldinho passing the ball to himself off the crossbar four consecutive times without touching the ground. 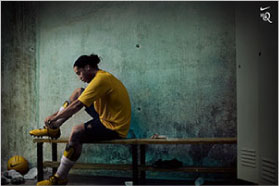 Nike's recent ad campaign of 2012 was a spin on the original Just Do It campaign; Find Your Greatness depicted the greatness everyone is capable of, featuring an overweight jogger and zero celebrity endorsements. 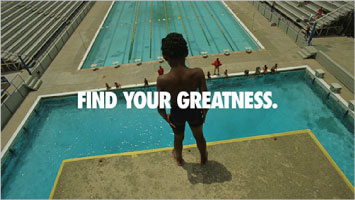 In 1995, tennis rivals Andre Agassi and Pete Sampras were pictured in Nike ads playing tennis in New York City streets, called "one of the best 25 sports ads of all time" by ESPN. 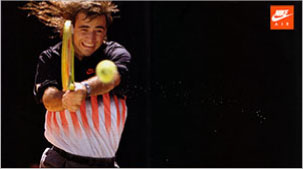 What You Need to Know About Nike Air Jordans

Nike Air Jordans are easily the blockbuster design of the brand's footwear portfolio. Air Jordans were released in the mid-80s and worn by basketball superstar Michael Jordan. Soon after the Air Jordan I debuted, it was banned by the NBA for its non-regulation colors. But that didn't stop Jordan from wearing his acclaimed shoe. Over the next 25 years, 26 different Air Jordan styles were released. 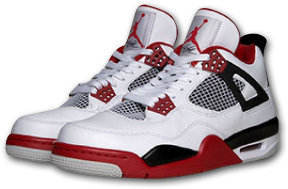 Here are 10 interesting facts you may not know about Nike's most famous shoe design:

Michael Jordan was an Adidas fan before he decided to sign with Nike.

The first Air Jordans were priced at $65 a pair.

The Nike Hare Jordan ad campaign in 1992 was a risky venture that paid off with an initial investment of $1 million.

The Air Jordan II was the first Nike shoe produced without Swoosh branding.

The Air Jordan V was the first basketball shoe produced with 3M materials so that sneakers looked flashy under bright lights on the basketball court. 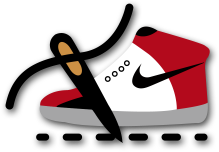 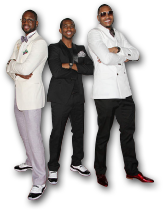 Boyz II Men popularized the dressed up Air Jordan look by wearing Air Jordan XIs when performing at the Grammys. 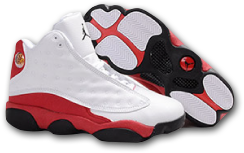 The Air Jordan XIII was the first shoe released under the Jordan Brand name in 1997, along with Air Jordan Trainers and Teams. 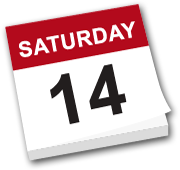 New Air Jordan designs are traditionally released on Saturdays to prevent kids from skipping class to buy them.

Nike has made an impact on the community by introducing the Nike Foundation to stop the cycle of poverty and encourage the power of human potential. The Nike Foundation provides charitable support to adolescent girls through the Girl Hub, formed in collaboration with the UK Department for International Development in 2010. Relief programs for adolescent girls have been established in Rwanda, Nigeria, and Ethiopia.

Nike has grown into a powerhouse brand that shows no signs of stopping.

Here are some interesting revenue-related facts:

By 2017, the athletic brand plans to hit the mark of $36 billion in annual revenue.

The Nike women's sector is currently growing faster than men's apparel and footwear.

Nike design and development is an ongoing process. A company that started with a single shoe design has broken barriers to excel in apparel, services, technology, and data.

NIKE LIVES BY ITS OWN RULE AS A RECIPE FOR SUCCESS